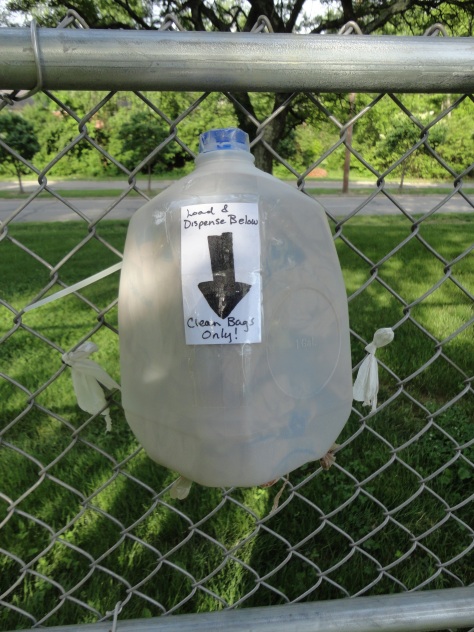 I recently made a number of water-proof and idiot-proof (so far)  dispensers for poo bags that I hung around the dog park. 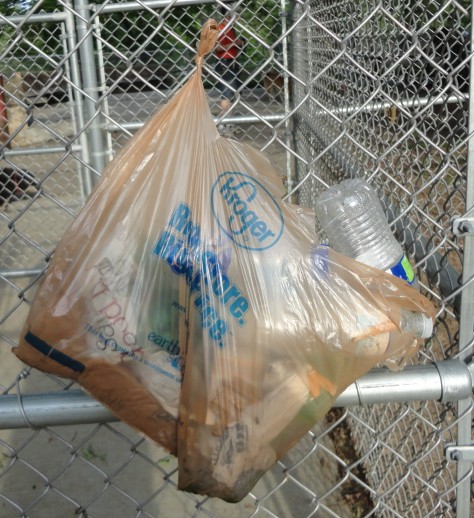 Usually, people hang bags of their used grocery bags on the fence at the park. People wind up using them as garbage bags, discarding full poo bags, cigarette butts, cans, bottles, you name it. They are open at the top, so rain falls in them. So stinking your hand into one of these bags is a serious risk, at least to your sensibilities. 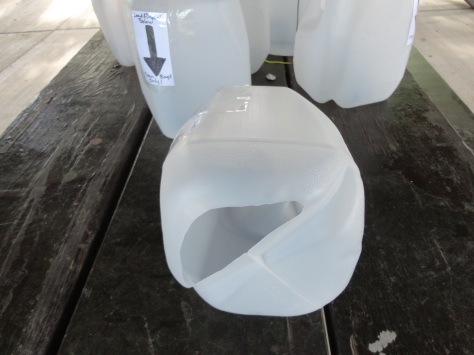 They are simple to make. Take an empty gallon waster jug and cut a hole in the front of the bottom big enough to stick your hand in. The bags are stuffed in this hole. They will not fall out. You just reach in and gab one when you need it. 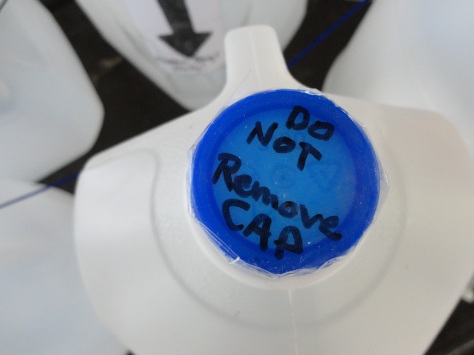 I don’t understand why, but everyone assumes that you remove the cap and pull bags out of the top. So I super-glue my caps on, write instructions, then wrap it with tape. The tape doesn’t really do anything except reinforce the idea that you aren’t supposed to remove the cap. 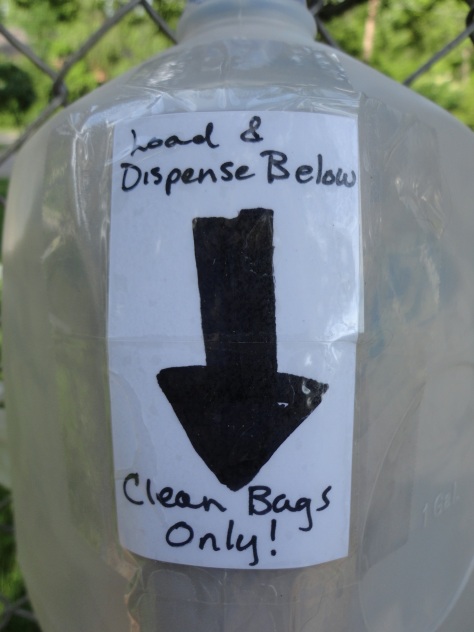 Then I add instructions. to the front. Like I said, idiot-proof.

I hang them on the fence using zip-ties or string through the handle. Easy-peasy. The park maintenance guy assigned to Mount Airy forest Dog Park really likes them and they get a lot of use. Some people even load them up for me.

I am now experimenting with decorating them. This is difficult since very little sticks to the plastic for long. I will let you know if I am successful. 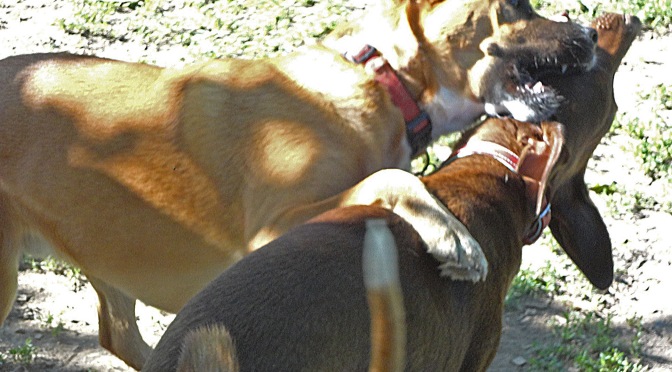 This is a photo of two dogs experiencing the joys of canine friendship. Wiley (the one with the teeth), is in a tussle with the love of his life, Jessie.  The better two dogs know and like each other, the harder they play, to the point where it’s difficult for someone who isn’t familiar with the dogs to know it’s not an attack.

If an unfamiliar dog approached Wiley or Jessie with the same level of intense play, chances are, a fight would break out. It’s not that different with humans. Close friends may insult us freely in jest. Strangers had better not.

Just like people, some dogs have better manners than others. When you are in an environment with strange dogs, it’s up to you to be aware of your dog’s tendencies and police their behavior or protect them when needed.

In the case of play between dogs, watch for signs that your dog or the other dog is being overwhelmed. Hunched posture, tucked tail, running away, are all indicators that a dog feels intimidated. If your dog or the other dog is displaying anxiety, it’s a good idea to separate the dogs. If the anxious dog opts to return to the tussle, you can assume they are just working out some jitters. You will sometimes see this when a dog is new to a dog park.

It may take a few low key visits and some ‘time outs’ for a nervous dog to become comfortable in the park.

Exposing their belly is a sign that they are conceding dominance to the other dog, and may or may not be part of acceptable play.

Some dogs, young dogs especially, have a poor sense of boundaries and do not recognize signals from other dogs to ease up or back off. If a dog pursues a dog that is clearly trying to get away, it’s time for the owner to step in and call the dog off. If the rude dog is pursuing your dog, feel free to ask the owner to call their dog. Chances are, you’ll get a response like, “Aw, Cujo’s just playing.” In which case you can respond, “He may be, but Poopsy doesn’t like it. It’s too rough for him.”

Cujo may just be playing. But just like humans who are teased too much, Poopsy may just explode.

Note: at our park, small dogs will take shelter behind their humans or under picnic tables to get away from larger dogs in pursuit. In many instances this is part of the play. Check the small dog’s attitude. Is it sneering or cowering?

Every dog is different, and they are different with different dogs. When Shadda was a puppy, Max would drag her around the yard by the scruff of her neck or wrap her jaws around her head. Shadda allows this from Max. Any other dog who attempts to dominate her is likely to get snapped at.

Chewy has been attacked by larger dogs and gets anxious if large, strange dog gets too close to him. On the other hand, I know mastiffs that shrug off provocation. The better you know the dogs around you, the better you can anticipate problems and separate dogs before a fight happens.

Tiny dogs are about the same size as squirrels and other prey. On very rare occasions, a small dog will stimulate a larger dog’s prey instinct, especially if the small dog is roaming about alone.

I don’t want to be alarmist, but it is important to be aware of strange dogs entering the park, and to maintain awareness of the dogs within fifty feet of yours. If you notice a strange dog “stalking” your small dog from behind, pick your dog up until you determine the nature of the dog. Play stalking is usually within eyesight of the other dog. Stalking from behind is hunting behavior.

So far, we’ve been talking about one on one behavior between dogs. That’s the safest way to have rough play. Sometimes two dogs will gang up on one in play, and it’s okay, if they know each other. But the more dogs who enter into the situation, the more likely it is that a fight will break out. 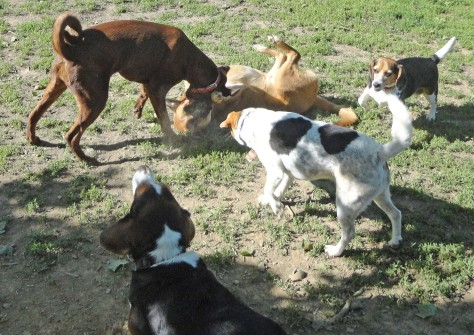 Dogs are pack animals, and as a pack they are unpredictable. It’s natural for them to congregate to watch when two dogs are tussling. If you see them crowding in and/or joining the fray, it’s time to separate the dogs before play turns into true aggression.

It’s that time of year again. Time to snuggle by the fire, drinking hot chocolate, and, what did you say? The dog needs to go out? Again?

Regardless of the weather or our own inclinations, dogs have to go outside on a regular basis, and they like having a schedule. There’s nothing easier than tossing your pack in the car and driving to the dog park. It’s so easy,  people forget that it’s cold outside.

I’m not talking about our resident New Zealander, who wears shorts and thongs when it’s 50 degrees out. He’s a special case. I’m talking about the less-hardy souls who hop in their heated cars, only to arrive at the dog park sans hat and mittens.

Forget that big fluffy coat. Go for layers. I typically wear 2 pairs of socks, yoga pants under sweats, then a tank/undershirt under a long-sleeved jersey, under a tee-shirt, under a sweat shirt, under a fleece-lined hoodie. All of this is topped with my warmest knit cap (hand-knitted by my favorite librarian).

Oh, and gloves – I like to layer gloves, too. I start with a pair of those cheap, one-size, knit gloves and top them off with even cheaper brown, cotton workman’s gloves. They are as warm as anything. I need not concern myself about ruining a nice pair of gloves with those unmentionable tasks we perform at the dog park. No worries if you lose one, since they come in packs with multiple pairs.

If it’s really cold, I pull on a neck gaiter. I knitted a tube that comes up over my head if needed or scrunches down around my neck. It stays in my car, just in case.

Lastly, once you arrive at the park, keep moving! It will help you stay warm. 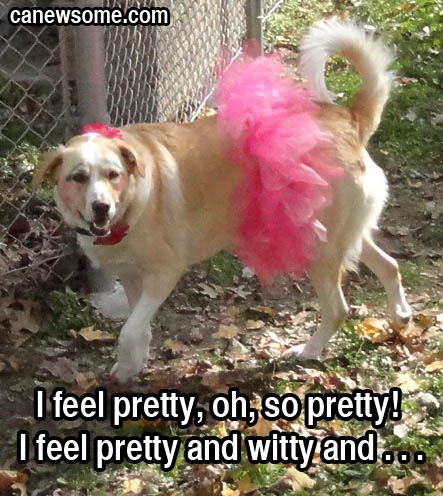 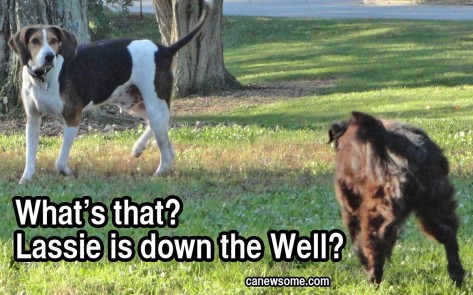 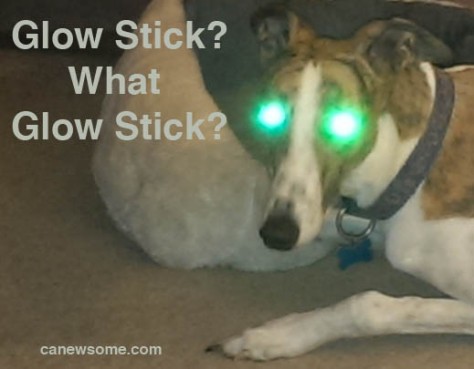 I’m still getting the occasional hit on my Cover Dog Photo Contest posts from last summer. Thought I would let you know, I’m running another portrait contest. This one is a raffle to celebrate the launch of Maximum Security later this month.

It’s part of my online launch party on Facebook, Wednesday, November 20, from 7pm – 11 pm, EST. Participate in party activities to rack up entries. There will be lots of other prizes as well, but the grand prize is an oil painting of your dog from photos that you supply to me. No purchase is necessary to earn entries.

Go to the Maximum Security Launch Party Page to RSVP, and while you’re there, get your first entry by suggesting a caption for the photo of Buddy, a little troublemaker caught in the act of eating Grandma’s Christmas present.

If you’d like to study up for the trivia questions, half of these are from this sample of Maximum Security.   The rest come from A Shot in the Bark and Drool Baby. Other activities do not require any special knowledge to participate.

Please feel free to invite anyone who likes dogs and mysteries – but then, who doesn’t? 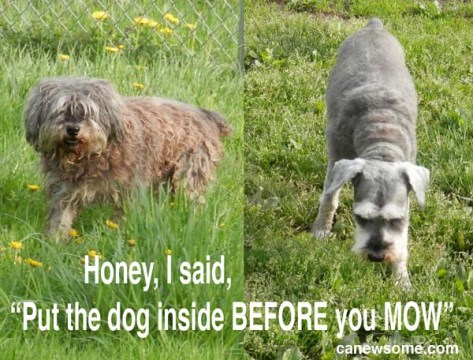 It is so Cold today
The wind is Bold today
And I am Sold today
On staying in my bed.

Oh, No, the puppies said
No matter what your dread
We’ll dance upon your head
Until you see our way.

And so we’ll bark and bark
Eventually you’ll hark
You’ll take us to the park
So we can run and play.

(Sung to the tune of Tra-La-La Boom-de-ay)

I feel like Dorothy, at the end of the Wizard of Oz, where she wakes up and pontificates about finding things in her own back yard. For three months I scoured the internet, looking for the perfect escape-artist cover-dog for Maximum Security. Doh. He lives next door.

Meet Simba. Simba Lives with Jerome Wilson, owner of Northside Grange Pet and Urban Farm Supply, where I get my grain-free kibble. 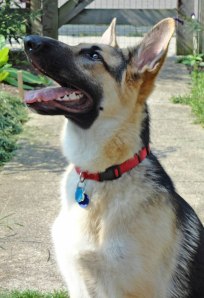 Simba is a bright and talented young man. I’ve known him since he came to live with Jerome as a pup less than a year ago. One day in July I was hanging over the fence and being neighborly. Simba has his own yard-within-a-yard, to keep him out of the garden. I noticed a small stock pallet leaning against the gate to Simba’s playpen, blocking the gap between the bottom of the gate and the ground.

“Does Simba ever try to escape?” I asked.

Turns out escape is one of his great pleasures in life.
Watch Simba in action. 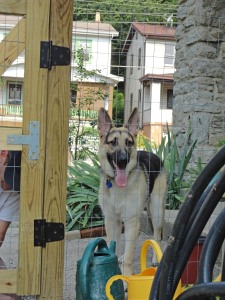 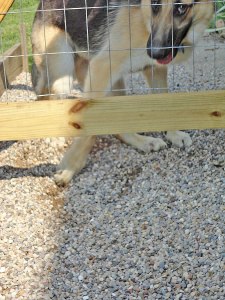 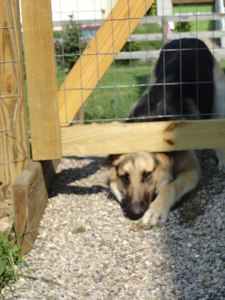 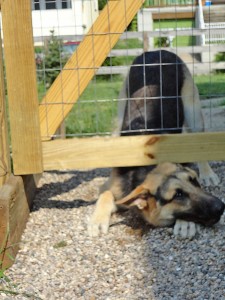 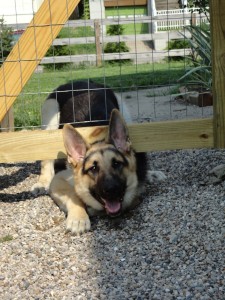 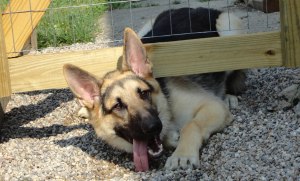 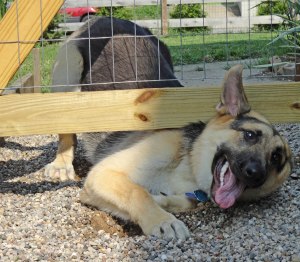 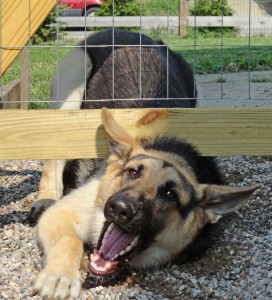 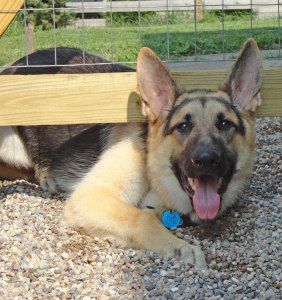 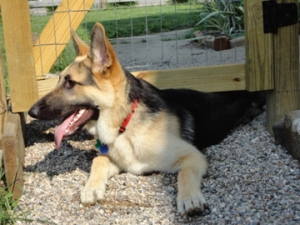 Simba Wiggled through, only to meet his warden . . . er, owner, Jerome, on the other side. 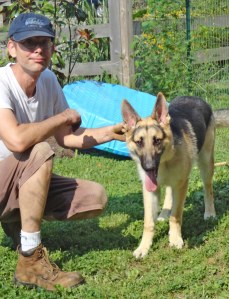 I haven’t decided which picture to use yet because I don’t know which is my favorite. I’ll be sure to post the oil painting here when it’s done. Meanwhile, I’ve been playing with this image and I like it alot. 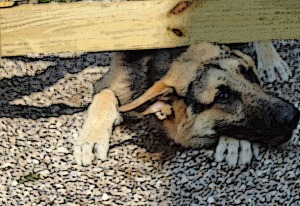 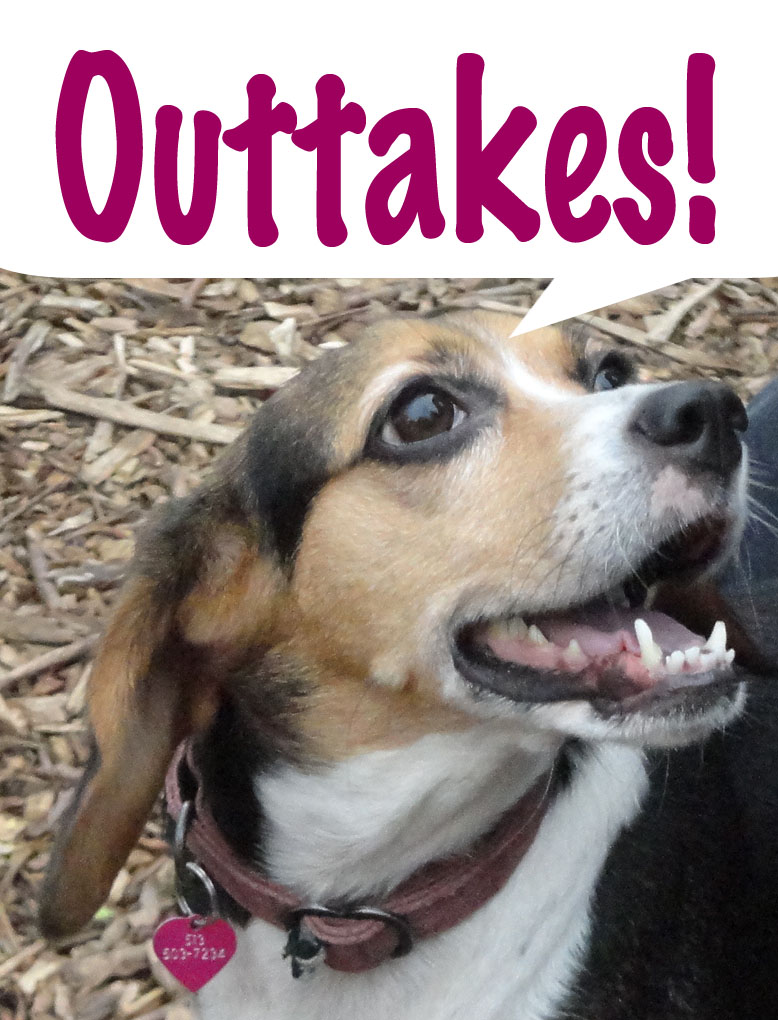 A Shot in the Bark

A Shot in the Bark

C. A. Newsome writes mysteries with a dash of romance centered around the Mount Airy Dog Park in Cincinnati, Ohio.